What Are the Top Step 1 Resources for Med Students?

What are the top USMLE Step 1 resources that students are using? At Cram Fighter, we track and report on the most popular USMLE Step 1 textbooks, lectures, question banks, and flashcards by what we see students adding into their Cram Fighter study plans. Read below to find out how Cram Fighter’s med student customers are studying right now in 2017. These aren’t necessarily the best Step 1 study resources, but are ranked by how often we see our customers adding them to their Step 1 study plans. (View our current most-added resources here.) 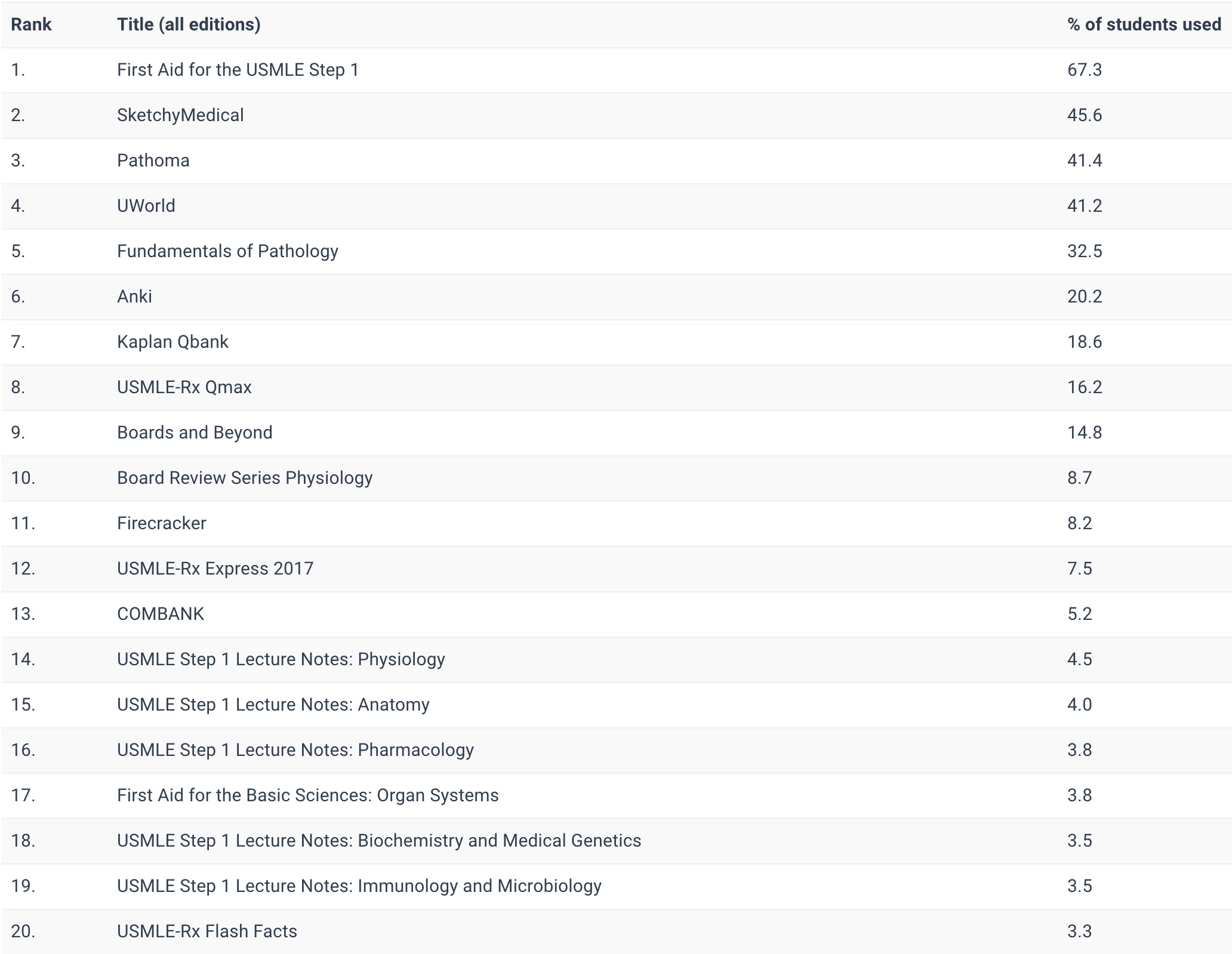 We find UFAP resources (UWorld, First Aid, and Pathoma) are still among the top 5 most popular Step 1 resources that our customers are adding to their study plans. The “UFAP” acronym was popularized by med students on Reddit. The importance of these resources has become common knowledge among med students, but there is still some debate about whether UFAP counts as the gold standard of Step 1 prep. Some students describe UFAP as the minimum resources, or as the backbone of a study plan, to be supplemented with others.

At Cram Fighter, we find that SketchyMedical has recently overtaken Pathoma in terms of popularity, with over 45% of Cram Fighter customers scheduling Sketchy tasks. This is a 35 point jump from last year’s stats, which we reported in our article How to Choose the Right USMLE Step 1 Resources. Anecdotally, more and more students tell us that they use Step 1 resources that cover microbiology and pathology, like Picmonic and Sketchy, to supplement their class lectures during M1 and M2.

We pay close attention to new resources that come out, and strive to keep our list of resources growing and available to our customers. In addition, we respond quickly to customer requests to add any new Step 1 resources we don’t already support. In fact, over the last year, we’ve added dozens of new Step 1 study resources to Cram Fighter, allowing Cram Fighter users greater ability to customize their USMLE Step 1 study schedules.

We’ve added and updated comprehensive lecture series, each of which include hundreds of lectures, such as Dr. Najeeb’s lectures, Boards and Beyond, and DrBeen’s lectures. We’ve also added several subject-specific (and organ system-specific) resources, perfect for supplementing your study plan and strengthening your weak areas. These new resources include the most recent edition of the increasingly popular Physiology by Linda Costanzo. We’ve also added Master the Boards USMLE Medical Ethics, Neuroanatomy: Draw It to Know It, and Netter’s Clinical Anatomy.

Check out our complete list of supported USMLE Step 1 resources, and send us an email if you would like to see one of your resources added. Our goal is the provide our users with the most dynamic and customizable med school study plan available. To see how powerful Cram Fighter is for organizing your resources, try our 7-day free trial and make your own USMLE or COMLEX study plan.

Get started with a FREE trial of Cram Fighter, the world's most popular study schedule planner for the USMLE, COMLEX, & medical school courses.

We collected a fresh batch of study tips from med students who have taken the boards.

How To Study for the COMLEX Level 1: Med Student Interviews, Part 3

Learn about this student’s personal experience studying for Level 1, the third in our series of interviews with Cram Fighter customers about their study tips for second-year board exams.

How To Study for the USMLE Step 1: Med Student Interviews, Part 2

This is the second in our series of interviews with Cram Fighter customers, who share their board exam study tips for Step 1 and Level 1.

Need to get more organized for your boards or coursework?