We summarize and discuss a recent, big change to the USMLE Step 1 made by the FSMB and NBME

On February 12, 2020, the Federation of State Medical Boards (FSMB) and National Board of Medical Examiners® (NBME®), co-sponsors of the United States Medical Licensing Examination® (USMLE®), announced a significant change to how the USMLE Step 1 will be assessed. In short, the USMLE Step 1 will be moving from a 3-digit scored exam to a pass or fail result.

The decision was made after almost 12 months of review and input collected at the Invitational Conference on USMLE Scoring (InCUS). InCUS (held in March 2019) was sponsored by the American Medical Association, the Association of American Medical Colleges, the Educational Commission for Foreign Medical Graduates, the Federation of State Medical Boards and the National Board of Medical Examiners.

Reasons for the Change

As part of its explanation for the shift to a USMLE Step 1 pass-fail scoring system, the FSMB and NBME (referred to after this as the USMLE program) cited concern over the way the 3-digit Step 1 score has evolved to become one of the most significant factors in evaluating students for different residency programs. They specifically cited “overemphasis on Step 1 performance” and said that they wished to refocus medical licensing authorities (and in turn, med students) more on the use of the exam for its primary purpose of medical licensure eligibility.

Put another way, the USMLE program now feels that the current use of the 3-digit Step 1 score as a means for screening applicants for residency programs deviates from how the Step 1 score was originally meant to be used. Moving to a pass-fail Step 1 test result and taking away this 3-digit score, they feel, will refocus the medical licensing authorities back to the primary intended purpose of the Step 1 exam—that is, to grant med student exam-takers a provisional license to continue in a post-graduate medical training program.

The AMA is one organization that supported the shift to a Step 1 pass-fail scoring system, stating in part, “The American Medical Association supports the decision to move to a pass/fail reporting structure for the USMLE Step 1 as a first element in improving the UME to GME transition. Our student, resident and physician members voted to endorse a pass/fail policy, in part, because we know our current residency selection system is causing significant distress for our students.”

USMLE.org published this chart of their view of the pros and cons of changing Step 1 to a pass/fail exam: 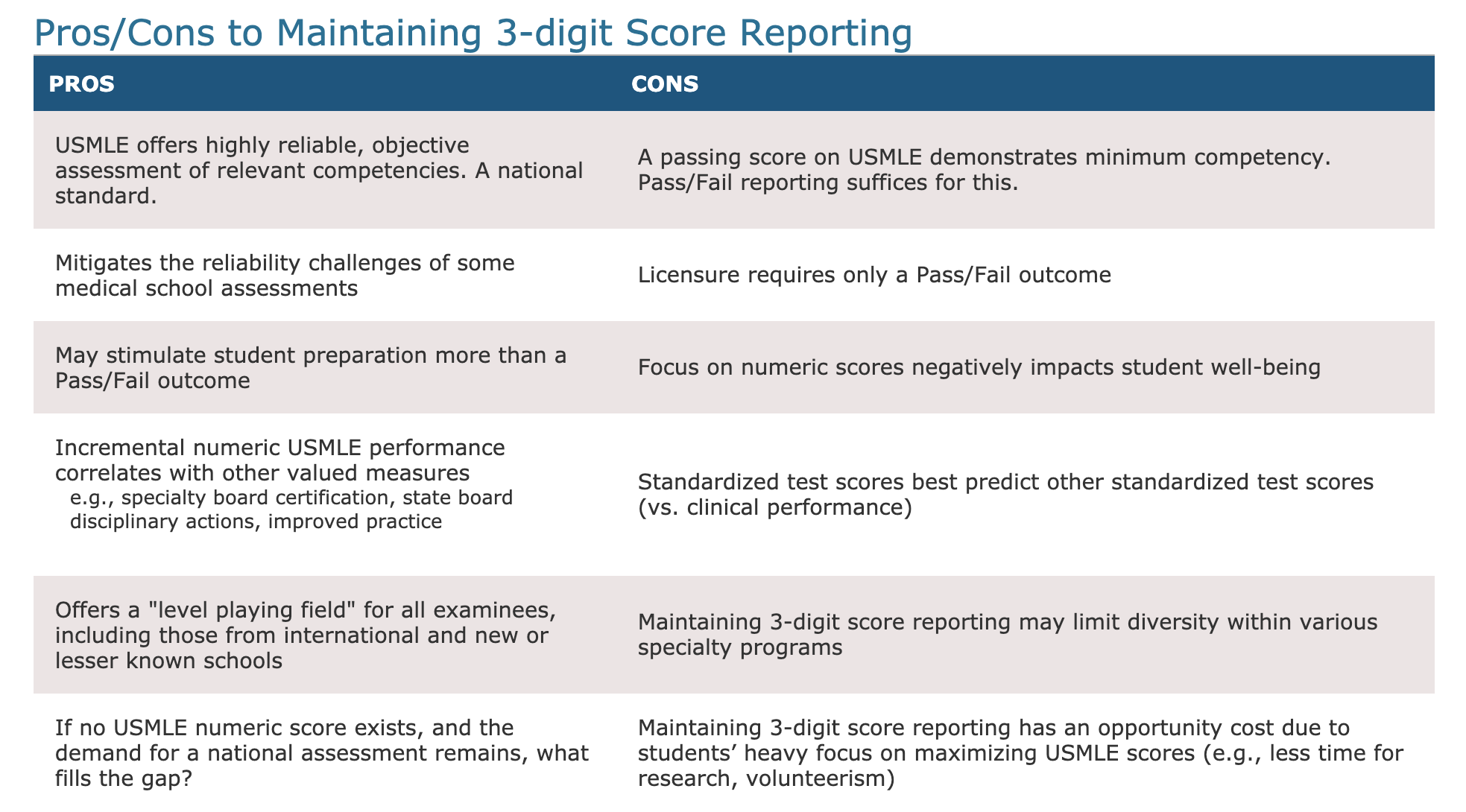 Timing of the Change

The USMLE program plans to make this change to Step 1 scoring effective as of 2022. While the details of the implications of this decision on stakeholders such as medical student exam takers, med schools, and residency programs are still being worked on by the USMLE program, they promise that more info is soon to come.

Notably, the Step 2 CK and the Step 3 exams will retain their 3-digit scoring system. As well, the USMLE program reduced the number of allowed attempts at any Step exam to 4, from 6. This change will be taking place January 1, 2021. Finally, the program will be requiring all med students to pass the Step 1 before they can take Step 2 CS. This requirement will take effect on March 1, 2021.

Medical students in forums such as Reddit have had mixed reactions to the coming change. Many students feel that a scored Step 1 exam was one way they could set themselves apart when applying to residency programs. They argue that a high Step 1 score gives students an edge when competing with other students, who may be coming from more prestigious medical schools. Other students took the position that the change isn’t necessarily a bad thing, since students will still have to pass all their school exams in the first two years of medical school, PLUS pass Step 1, so they will still be learning.

As for test prep companies, including Cram Fighter, it is hard to predict how the change will affect their businesses. It could be that med schools don’t change their curriculum significantly to prepare students for Step 1, so there will still be a need for these outside companies to provide content for med students to get students ready for Step 1. It’s also possible that since Step 2 CK will still be a scored exam, that exam might be more closely evaluated by residency programs to determine which applicants to accept, so med students may still want external test preparation resources outside of their clinical experiences and coursework.

Below are some excellent articles and blog posts that illustrate the medical school industry’s as well as med students’ perspectives on both sides of the coming change:

Get started with a FREE trial of Cram Fighter, the world's most popular study schedule planner for the USMLE, COMLEX, & medical school courses.

How To Use Cram Fighter’s USMLE Sample Schedules

Every year, we post PDF and Excel sample study schedules for the boards. Here's how you can use our sample schedules to create your own personalized study plan.

We discuss a lesser-known but powerful use case for Cram Fighter's study blocks feature.

For students looking for a Step 3 prep course, we breakdown some of the available options.

Need to get more organized for your boards or coursework?